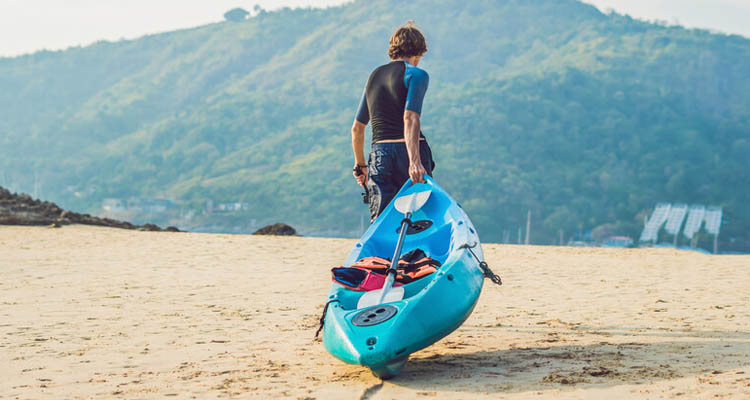 If you’re in the market for a kayak, whether it be for fishing or just exploring, you probably know by now that kayaks come in all shapes and sizes. How much a kayak weighs will depend on several factors including the brand and the length of the kayak.

With that being said, the average weight of a kayak is about 65 lbs. However, kayaks can range in weight from 32 pounds all the way up to 144 pounds.

To give you a better idea of how much the different types of kayaks weigh, I’ve taken the time to compile a list of 15 of some of the most popular kayaks on the market today. I’ve not only included their weights, but also their lengths, and widths. 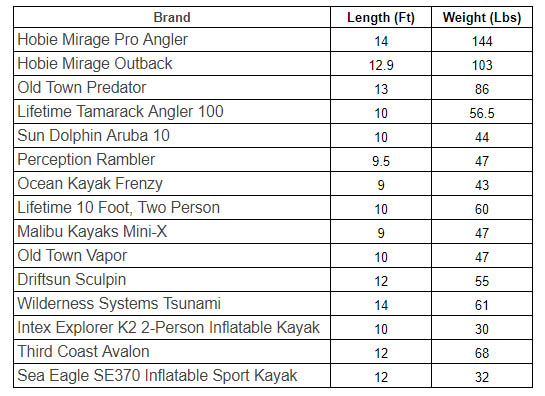 Why Should You Care How Much a Kayak Weighs

One of the most important things to consider when deciding on a kayak is how much it weighs!

If you choose a kayak that weighs too much, then you may run into problems with transporting it, especially if you tend to go kayaking by yourself.

I made this mistake when I upgraded from my 70 lb Ascend fs12t fishing kayak to the heavier Old Town Predator 13 that weighs a whopping 86 pounds.

While 16 pounds may not seem like a big difference in weight, it is when you are having to lift your kayak by yourself up onto the roof of your car.

If you are lucky enough to have a truck or kayak trailer, the weight of your kayak may not be as much of a concern.

It may also not be a problem if you usually go kayaking with another person. Most kayaks are easily manageable when two people are lifting it.

Does The Length Affect How Much a Kayak Weighs

Yes. I haven’t found a kayak where the length didn’t play a role in how heavy the kayak was.

In fact, if you take two identical kayaks (other than their lengths) and compare their weights, you’ll find that the longer, wider kayak will weigh more.

If you think about it, it makes complete sense! More material is needed to make a longer kayak, so naturally it should weigh more.

Something else to keep in mind when it comes to length is that with a longer kayak the weight is not as evenly centered as with a shorter kayak.

This might not seem like a problem, but when you try to lift it by yourself, you quickly realize that it is.

I think a nice sweet spot as far as length goes for a kayak is about 12 ft. Most people should be able to handle a kayak of this length, plus provides most with plenty of room and it tracks well in the water. Shorter kayaks are a little harder to paddle, as they do not track well.

Can a Heavy Person Use a Lightweight Kayak

My brother-in-law has this very same kayak and he is 6’0 and I would say weighs around 240.

With that being said, it may not be the most comfortable ride, or the most practical!

If you are just cruising around the lake, then a smaller kayak is more than likely just fine.

However, if you are using it for fishing, then you may need something a little bigger. Not only do you need a kayak that can handle the actual weight of you and your gear, but you also need a kayak that has enough room.

The thing is, most of the lighter kayaks are also on the smaller size. This includes their length as well as width.

Yes, inflatable kayaks in general are lighter than their hardshell cousins. However, they are not that much lighter!

On average, when compared to a hardshell kayak of equal length, an inflatable kayak is on average 10-20 pounds lighter.

While this is a significant amount of weight, is it enough to justify opting for an inflatable over a hardshell simply because of weight? In my opinion, no!

Hardshell kayaks are much more stable than inflatable kayaks, making them a better overall choice.

Also, while I’ve found that the average hardshell kayak weighs roughly 65 pounds, there are models that weigh less than 50 lbs.

Most people won’t have a problem transporting a 50 pound kayak, even if you have to lift it up on your roof.

How Does a Kayak’s Weight Compare to a Canoe

For the most part, a canoe weighs about the same as a kayak does of equal length. For example, Old Town’s Sarnac 14 foot canoe weighs in at 79 pounds and has a max capacity of 750 pounds.

In contrast, Old Town’s Predator 13 foot kayak weighs in at 86 pounds, but only has a max capacity of 425 pounds.

As you can see, although the weight of the kayak and canoe are pretty close, the canoe has much more load capacity than the kayak.

While this isn’t always the case, after doing lots of research, I found that in general between a kayak and canoe of equal length is that the canoe usually outperforms the kayak when it comes to how much it can carry.

If you have a truck or better yet…a kayak trailer, then you have nothing to worry about. All you have to do is load it up and strap it down.

However, if you have a car or SUV and don’t have a trailer, then you’re going to have to come up with a better game plan.

For most, this means buying and installing a roof rack on your car or SUV if it doesn’t already have one.

There are hundreds of roof racks on the market, so picking one that fits your car/SUV and fits your budget shouldn’t be a problem.

For the time being, you could even do what I had to do in order to get my kayak home from the sporting goods store, and that is to use a couple of pool noodles as your roof rack.

You’ll want to buy the nice thick ones and not the cheap ones that you find at the Dollar Store! You’ll also need at least 4 tie down straps to secure the noodles and kayak to the car.

While this method could get the job done in a pinch, I don’t recommend it as your primary way of transporting a heavy kayak. If your kayak is on the lighter side, say around 50 lbs, then you could probably get away with it.

Here is a video that shows what I’m talking about in more detail:

Another option is to buy a universal soft roof rack pad system!

I do a lot of saltwater fishing in my kayak and over time, the metal roof rack that I initially purchased for my car eventually rusted from all the saltwater dripping from my kayak. This is what lead me to the Yakima Easy Top Instant Roof Rack.

It’s super simple to install (it took me less than 10 minutes to figure out and install), fits most vehicles and can hold up to 80 lbs of weight. And best of all (at least for me)…it doesn’t rust!

It’s also nowhere near as expensive as a metal roof rack! If you would like to check it out, you can follow this link over to Amazon and see the exact one that I use.

I know it’s hard to take a step back sometimes and reevaluate things, especially after you’ve already put in the time researching, and deciding on the perfect kayak for you.

However, it’s extremely important to know how much a kayak weighs before you buy it! The last thing that you want to do is invest hundreds of dollars into a kayak only to find out once you get it home that it’s just too heavy.

Also, if at all possible, it’s always a good idea to see the kayak in person before buying it and if possible, try and pick it up to get a better idea whether or not you will be able to handle it. 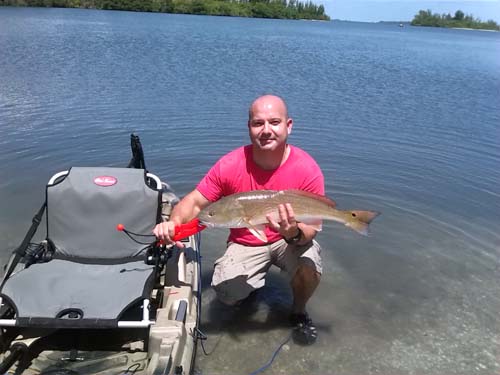